Christmas is one of the most fascinating times of the year in Sicily, among decorations, illuminations and centuries-old traditions. A holiday that is deeply felt and celebrated throughout the island in many aspects of life and culture. Holidays are an opportunity to get together and celebrate Christmas in a magical atmosphere of unique rites rich in history. A particularly happy time of year to spend a holiday in Sicily in a setting full of suggestions and emotions, between culture, history and traditions.

Among the most widespread traditions in the provinces of Catania and Messina, and in particular in the Ionian area of ​​Etna, there is the so-called 'Zucco', one of the typical rites of Christmas Eve in Sicily. In the main squares of the towns, but in the past also in crossroads, as the Sicilian poet Ignazio Buttitta tells, wood was piled up, to form an imposing pyramid, ready to be burned on the night of Christmas Eve, before the traditional dinner. At the end of the celebrations there was the habit of taking home, as a sign of good luck, a piece of wood from the stack to feed your fireplace.

Around the Christmas bonfire, still celebrated today with warm participation in Acireale, Acicastello, Acitrezza, Belpasso, Castiglione of Sicily, Fiumefreddo of Sicily, Giarre, Linguaglossa, Mascali, Nicolosi, Pedara, Randazzo, Riposto, Santa Venerina, Weather in Trecastagni, Valverde and Zafferana Etnea, all the inhabitants gather. An opportunity to get together and exchange Christmas greetings. Before switching on, ‘U Zuccu is blessed by a priest, in the presence of the mayor and other institutional offices.

In the rite, which originates from ancient pagan traditions then acquired by Christianity, the flame symbolizes faith, fertility and life but also represents the fire to warm the baby. A show that keeps its charm and ardor intact, able to fascinate tourists who decide to spend the Christmas holidays here. The happy position of Villa Maria, a few meters from the Giarre railway station (CT), makes it easy to reach many of the most suggestive destinations. By staying overnight in our hotel you can immerse yourself in the Christmas atmosphere typical of Sicily, enjoying an oasis of peace and serenity for your rest.

Although in recent years there has been a tendency to anticipate the times, in Sicily it is starting from 8 December, feast of the Immaculate Conception, that you begin to breathe the Christmas atmosphere. Tradition has it that on this date the ritual of decorations begins in the houses, with the preparation of the Christmas tree and the nativity scene. It is above all the latter, representing the theme of the nativity, the true symbol of Holy Christmas in Sicily. There are many nativity scenes that bloom all over Sicily, many of which are particularly characteristic.

Among the most loved are the living nativity scenes, which represent a way to involve the entire community and which still attract many tourists and enthusiasts today. The Forza d’Agrò (ME), near Taormina, you can breathe an almost fairytale atmosphere, among the narrow and perched alleys of the enchanting medieval village. In the living nativity scene, ancient crafts flourish again, objects, the tools and melodies of the past. Molto suggestivo è anche il presepe vivente di Vizzini (CT). In the land where Giovanni Verga set his Cavalleria Rusticana, a characteristic nativity scene is created with the various characters of the famous story. It is a unique nativity scene in the world that tells the Nativity within Verga's reality where the various characters of Cavalleria Rusticana, The Magnifying Glass, History of a Blackcap, The Malavoglia are the protagonists.

In Caltagirone (CT), city ​​of ceramics, nativity scenes are a real form of art for which Calatini artisans work all year round. Here we find models of all sizes in every corner of the city, real jewels of craftsmanship made by master craftsmen, Santari e Pasturari, who hand down this centuries-old tradition. The city is also home to the "Luigi Colaleo Collection" International Nativity Museum, which collects small works of art typical of eastern Sicily. Another particularly suggestive nativity scene is the eighteenth-century one which is located inside a lava stone cave in the small church of Santa Maria della Neve in Acireale (CT). It is made up of about thirty life-size characters with a wax face and a wooden body.

The nativity scene of Baron Scammacca in Catania also dates back to the 1700s, made with a particular paste finished with a resinous paint. In the end, an elegant nineteenth-century building in Giarre (CT) it hosts a characteristic Museum of the Nativity with approx 200 pieces between Sicilian and Apulian terracotta nativity scenes, in pine wood from Trentino, among magnificent Neapolitan figures, cribs in Lecce papier-mâché, etc. In the museum, made over 25 years ago by the A.I.A.P (Italian Association of Friends of the Crib), courses on the crib technique are periodically organized. 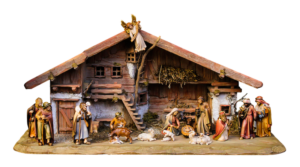 Another tradition that still resists in Sicily is that of the ancient itinerant singers who, during the holiday season, they spread the religious cult by playing bagpipes and 'ciaramedde', characteristic wind instruments historically made entirely of goat or sheep skin, today also with other materials or from a rubber bladder. Usually the bagpipers or ciaramiddari accompanied with music and songs the novena that took place in front of the altars, where people gathered to pray. A Catania, until a few years ago, it was not unusual to see them play even in the shops of the historic centers. Today, even if less common, continue to cheer up numerous Christmas events with the unmistakable melodies that make Christmas even more magical. 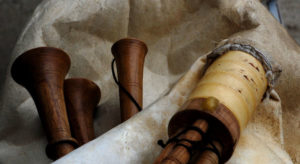